Prime Minister Modi presided over the 40th edition of PRAGATI, an ICT-based multi-modal platform for Pro-Active Governance and Timely Implementation that brings together the federal government and state governments.

The Prime Minister’s Office (PMO) said in a statement that nine agenda items were reviewed during the meeting, including eight projects and one program. The Ministry of Railways, Ministry of Road Transport & Highways, and Ministry of Petroleum & Natural Gas each had two projects among the eight.

One project was each for the Ministry of Power and the Department of Water Resources, River Development, and Ganga Rejuvenation. The Ministry of Railways, Ministry of Road Transport & Highways, and Ministry of Petroleum & Natural Gas each had two projects among the eight.

Prime Minister Modi stated that agencies involved in the infrastructure sector, such as roads and railroads, should coordinate their initiatives with the water bodies being constructed under Amrit Sarovar. 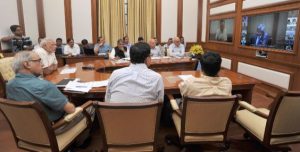 According to him, this would be a win-win situation because the material excavated from the Amrit Sarovar could be used for civil works by the agencies. The prime minister also discussed the National Broadband Mission during the meeting.

The PMO requested that states and agencies use the unified Gati Shakti Sanchar Portal to ensure that Right of Way (RoW) applications are processed quickly. It was stated that this would speed up the mission’s implementation.

Simultaneously, they should endeavor to improve the general public’s quality of life by utilizing technology. PM Modi went on to say that states might create state-level GatiShakti Master Plans based on the PM GatiShakti National Master Plan.

He believes that this will help with improved planning, identifying and addressing important concerns, and assuring greater coordination for timely project completion. According to the PMO, 311 projects worth Rs 14.82 lakh crore have been examined throughout the 39 PRAGATI meetings.